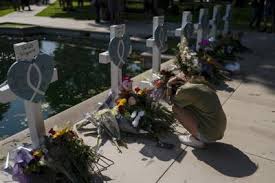 Like so many of you, I have been sickened by the monstrous actions of a demonized man who slaughtered innocent children and teachers in a Texas classroom.  For the life of me, I cannot fathom how someone can become so deranged, so driven by the father of murderers (John 8:44), he could act in such a fiendish manner.  Then again, I have a tough time wrapping my head around how Israel continually allowed themselves to be drug into the cultural sewer of their world by burned their babies alive in an effort to appease Molech.  The only answer I can contrive is that they, like those who act in such despicable ways today, have succumbed to a culture infected with a serious case of sinful rot. Of course, that type of speaking does not correspond with the fevered political back and forth which immediately followed the horrific display of sin, hence it is never ventured into the public forum.  Still, the bottom-line problem with our nation, the root cause of incidents such as these we have witnessed the last few days, is sin…plain and simple sin.

I was struck by the immediacy of the vulgar and vehement chant made by some and directed at those who offered their “prayers” for the families of the victims.  Their response made it clear they had no interest in our “prayers” and they graphically stated their position.  I tried to step back and analyze why such vitriol was thrown at a means of conveying concern and compassion.  I wondered “why are they so decidedly against someone offering their thoughtful concern and prayers?”  Suddenly, it dawned on me.  They do not care for such prayers because those prayers are useless.  They, in reality, accomplish nothing because they are nothing more than hollow words used by individuals who rarely pray…at least as prayer is portrayed in the Bible.

Perhaps their anger is telling us something about where prayer has gone over the last decades.  It could be the church is being sent a message about once more becoming serious about prayer.  After all, the Bible, which is the sole inerrant describer of all things prayerful, still tells us “the fervent prayer of a righteous man is effective” (James 5:16).  We are still informed that “detailed prayer offered with thanksgiving enables the peace of God to guard our hearts” (Philippians 4:7).  It is still recorded that those who believe God exists “and diligently seek Him will be rewarded” (Hebrews 11:6).  I am still amazed when I read the prayers of the saints, those prayers we offer to Him, are stored up and lightning and thunder in the presence of our King (Revelation 8:3-5).  Without doubt, the urgency and regularity of prayer in the church should be revived.  Perhaps then the world will see our God dwelling among us and seek for us to cry out on their behalf to a merciful and loving God.

Where does that leave us today?  What sense can be made of a world gone crazy?  How can you and I respond, not only to the hate-filled cries of those who do not have faith (2 Thessalonians 3:2), but to each other in the community of faith?

First, I remind you of the old bromide “Forewarned is Forearmed.”  Nothing about incidents such as happened in Uvalde should surprise those who pay attention to the prophetic Word.

“But know this, that in the last days perilous times will come” (2 Timothy 3:1).

We have repeated that verse so many times, it has, in many cases, lost its full impact.  If you take time to dig into the words employed by Paul, you will discover several unsettling things about the “last days” in which you and I live.  For instance, the word “perilous” was used one other time in the New Testament.  It was used to identify the rage-filled anger of demoniacs who confronted Jesus (Matthew 8).  It describes a time when life will be emotionally difficult to bear.  It points to harsh times, cruel days, and ruthless acts.

Be forewarned.  The days are not going to get better.  You can expect atrocities such as Uvalde to continue.  We can expect the carnage of Ukraine to continue.  As darkness closes in on our planet, those driven by Satan will manifest in exceedingly worse manners.

Do not surrender to fear and dismay.  We have been told in advance what was going to happen.  We have also, thankfully, been told we are going to overcome (1 Corinthians 15:57).  Keep your eyes looking upward, the redemption of the earth, brought about by the coming of Jesus, is just over the horizon!

Second, fight the good fight of faith (1 Timothy 6:12).  Build up your faith, praying in the Spirit (Jude 20).  Stay strong in the Lord and the power of His might (Ephesians 6:10).  Cling to your brothers and sisters in Christ with great tenacity.  If you have dropped out of church, get back in and worship Jesus with other people.  Let their faith build your faith.  Now is not the time to back away and allow pettiness and fear to dominate your life.  Gather with others of like precious faith and allow the Holy Ghost to flow in your midst.

Third, find out for yourself just how much you can yield your life to God and be used by Him.  Stop waiting on others to do the Kingdom work that cries out to be done.  Jump in there and see how God will use you.  Remember, a simple cup of water in His name (Mark 9:41) …or handing out bottled water in our day…or the amazing display of God’s power through a spiritual gift (1 Corinthians 12:8-10) are both arenas where we can be “used by the Lord.”  In our dark and sin-cursed world, those who are genuinely used by the Father stand out like lights in a dark room.  Then again, isn’t that what Jesus told us we should be?  And while we are at it, let’s pray with passion and vigor for those enduring the grueling loss of their children as well as those who passionately scream that they are not interested in our prayers!