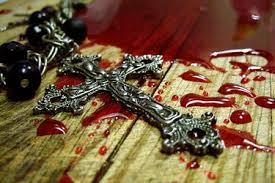 Like many of you, I am watching the horrid actions of the Taliban unfold in Afghanistan.  As they march in their bloody determination to exterminate all those who trust in Jesus, I am met with a mixture of emotions.  Part of me wants to blame those who have left them as hapless victims before the predators.  Part of me wants to call down fire and brimstone on those who perpetrate such brutality.  Part of me wants to crawl into a corner and weep for the senseless barbarism being put on display.  Part of me seeks to sink into despair because I am utterly helpless to do anything about the global matter which is radical Islam.  Yet when I reach the end of my futility, I am reminded I do have two things at my disposal which outrank anything a President or General can ever utilize.

First and foremost, I have prayer at my right hand.  I have the privilege of calling upon a God who is far more concerned about the plight of His little ones in Afghanistan than I could ever become.  He loves them with a passion which I will never, despite all my best efforts, approximate.  In fact, while I pray in generics, “God protect your children in this horrifying ordeal,” He knows them by name!  Right now, as I punch these keys and utter a prayer for their safety to my Father in heaven, His Son, the Risen Christ, pleads and makes intercession for them as well (Hebrews 7:25).  My prayer, your prayer, linked with His prayer, creates a powerful influence in the throne room of heaven.  Keep asking for the impossible.  Keep asking for divine protection.  Keep bombarding heaven for miraculous intervention.  Don’t be afraid to ask large.  One in His presence can do far more than you and I can dare dream possible (Ephesians 3:20).

Second, I have the clear statements made in God’s Word that some of us will lay down our lives for the name of Jesus.  Remember these haunting words from John the Revelator.

When He opened the fifth seal, I saw under the altar the souls of those who had been slain for the word of God and for the testimony which they held. And they cried with a loud voice, saying, “How long, O Lord, holy and true, until You judge and avenge our blood on those who dwell on the earth?” Then a white robe was given to each of them; and it was said to them that they should rest a little while longer, until both the number of their fellow servants and their brethren, who would be killed as they were, was completed.

Regardless of your particular interpretation of Revelation, there is something to be observed here and it is being played out before our eyes.  As those who had been slain for the testimony of Jesus cried out for an answer about the timing of judgment, the answer given was not one I find particularly comforting.  Rather than responding as would I in my carnal passion, Jesus did some amazing things.  Frankly, I want ever Christian in Afghanistan to be miraculously delivered.  In case such is not the case, the statements of Jesus apply to them.

First, they are to rest for a little while.  Those who are killed for His sake find that rest.  In all honesty, I think they deserve the first place in line when all things grand and glorious are given out in eternity.

Second, it is not over yet.  Others are going to be called on to lay down their lives for the sake of Jesus.  You do know, don’t you, that these precious brothers and sisters in Afghanistan are not the only ones facing death for the sake Jesus?  On average, a Christian is killed for the faith EVERY TWO HOURS, 24/7 (htp.org).  Churchinneed.org, a Catholic organization, states 1 in 8 of all Christians around the globe suffer a sever form of persecution.  It didn’t get much coverage and we were obsessed with other things, but the truth is that over ONE MILLION people were martyred for the faith between 2000 and 2010 (theestherproject.com).  The altar from which the slain cry out in Revelation 6 is a large expanse and growing more crowded as the days pass.

Third, it will end and the Lamb who opens these seals will arise with justice.  The very perpetrators of these horrendous deeds will themselves quiver and quake in fear as the mighty Lamb of God rises in judgement (Revelation 6:12-17).  Our Redeemer will not allow the death of His little ones to take place without reckoning.

What are you and I to do?

PRAY!  As stated above, our prayers can blend with the prayers of our Elder Brother and effect miracles.

PARTCIPATE!  Give to an organization that will assist these, and other hurting believers.  Be careful where you put your money.  There will be scam organizations which appeal to your sympathy and use your money for lavish lifestyle enhancements of a few.  I know many of you who read this are not in my Church of God tribe, but I assure you, funds given to Church of God World Missions are used for the purpose designated.  You can go to cogwm.org and give online if it is in your heart.

PRACTICE!  Boldly live out your faith.  BE a Christian.  Display His love to others.  When the time comes, vote your deeply held convictions.  Most of all, prepare yourself for the day when you become that 1 in the 8 who suffer some form of persecution.  Dig deep in God’s Word.  Seek to be continually filled with His Spirit.  Develop a strong band of fellow believers who will speak into your life.

None of us know when it will happen, but the day is coming when the Son of Man will arise with healing in His wings.  Until that time, precious saints will be called upon to exercise that ultimate act of devotion by laying down their lives.  May our Master find in us men and women who are worthy to walk alongside them in His kingdom!