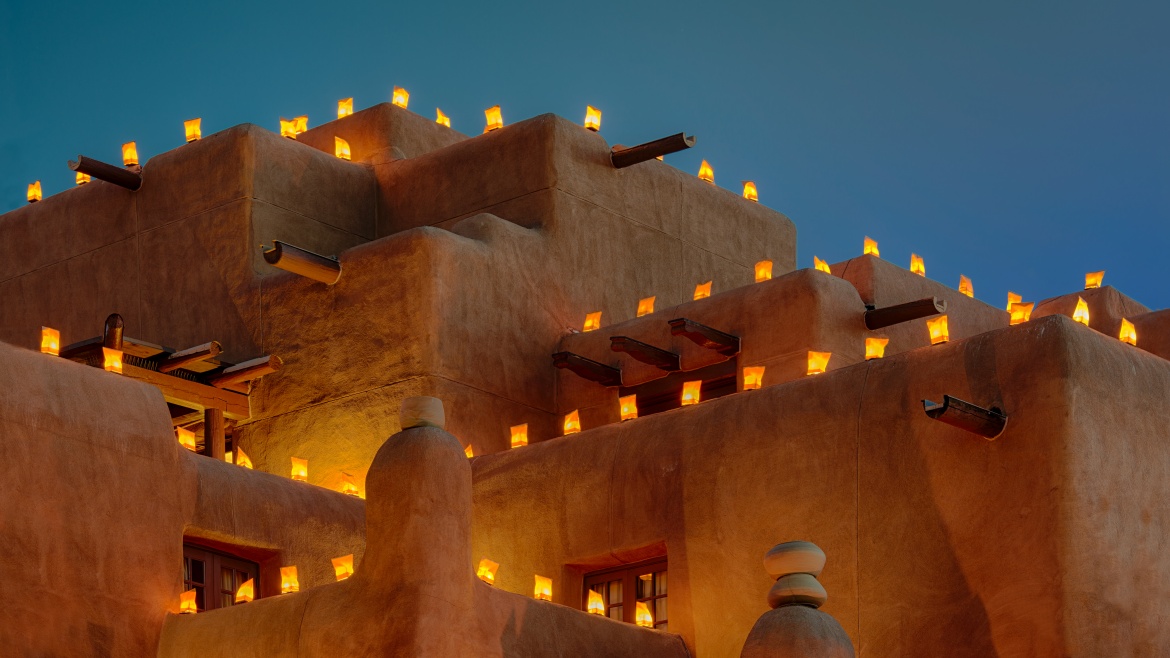 “Does anyone even know we are here?”  That’s a tough question we, the church, from time to time, should be asking ourselves.  I picked up on an idea many years ago while working for Larry J Timmerman, at that time Administrative Bishop of the Church of God in Alabama.  Larry would, on occasion, stop a short distance from an appointment at a  Church of God and ask if they knew where the local church was located.  Amazingly, many times those working at the gas station or convenience store had no idea there was a Spirit-filled church within sight of where they were working.  Taking my cue from the Bishop, I have had that same experience through the years.  It’s sad, but true.  Many times, we fall short in the “light the world” business.

Contrast that with what Paul stated about the church in Philippi.

Paul’s description of this group of saints was akin to my first experience with luminaria while living in New Mexico.  These lights, placed along the rooflines of buildings at Christmas, glow brilliantly in the darkness, reminding everyone of the Light of the World who graced this planet so long ago.  These saints in Philippi, like those New Mexico luminaria, stood out and drew the attention of the entire city.

Sadly, so much of our current attempts to gain the attention of the lost culture around us resemble the sad efforts of Opie Taylor to gain the attention of his love interest (Season 3, Episode 28, The Rivals).  Opie does his best to impress Karen, and it all falls flat.  His gyrations and acrobatics accomplish nothing except the disdainful glare of his intended. You feel sorry for him and probably develop a sense of “bless his heart” as you recall some of your own ill-fated attempts…at least I do.  The story unfolds and we discover than his machinations did nothing to help him.  Sure, Karen was interested, but not in the flailing attempts to attract attention.  Instead,she was drawn to a sweet little boy named Opie.  His flurry of activity was not his luminaria, it was him, who he was, that captured his girl’s heart.

Perhaps it is time we in the American church step back and realize our frenetic attempts to grasp the attention of a dead culture is not working.  Instead, it may be time for us to unveil lives reflective of our Elder Brother and allow His dazzling glory to become the attraction.  After all, that’s what they did in Philippi.  Take note of what they were doing.  Who knows, it might cause us to shine so brightly, we don’t need all the extra lighting.

The shined because they learned to get along with each other (2:12).  They had to learn how to work out their own salvation with fear and trembling.  It’s not my job to work out your salvation nor yours to determine mine.  We are to fearfully and with trembling come before the Risen One and allow Him to work through us.  When prominent ladies were at odds, they were called upon to live in harmony (4:2).  They were to learn how to get along.  In this age of sharply divided opinions in the church over virtually everything, nothing would make us shine brighter to a dark world than the fact we might disagree, but we have learned how to get along with each other.

They shined because they exhibited godly living (2:15).  Out there, among those who did not attend church and who despised the message of the cross, they lived blameless and upright lives.  While their culture was crooked…this word means to be bent, immoral, harsh, or evasive…they lived lives marked by uprightness, care, and being forthright.  When their culture was perverse…this word carries the idea of leading someone or teaching someone how to be crooked…they stayed away from such ideas and teachers, focusing instead on how to please God with their daily lives.  No wonder they stood out like glowing lights on a rooftop in the New Mexico darkness!

One last thing.  They glorified God in the tough seasons (2:17-18).  Paul was being expended like a drink offering poured upon the ground.  They too were experiencing the early stages of intense persecution. Still, in the middle of their dark season, they were filled with the joy of the Lord.  Little wonder they made such an indelible impression.  Our day is punctuated with a continual stream of bad news.  If in the midst of all the chaos and confusion we can be people of God, made strong with the joy of the Lord (Nehemiah 8:10), a dying world will not be able to look away.

You and I, and I count us as part of the American church, are facing the darkest, most dangerous era of our lifetime.  We are confronted with a pandemic which seems to not be going away any time soon.  The culture around us is increasingly hostile toward the true faith and both government and business are not interested in Christian values. On top of that, if the prophetic scriptures are true, and I believe they are, things are not going to get better before Jesus comes back.  In the face of such daunting circumstance, perhaps the time has arrived for us to stop chasing after the glitzy toys of celebrity Christianity and allowing them to speak for us.  Maybe, just maybe, if we start living the life displayed by the Philippian believers, we too can become luminaries, shining brightly against a dark backdrop, pointing lost men to a Savior capable of radically changing their lives.